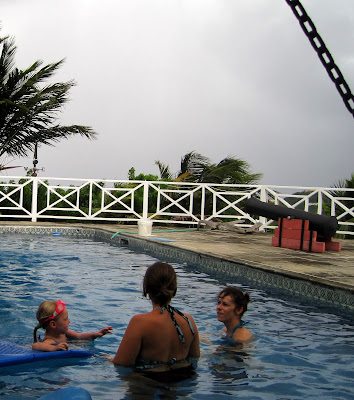 At our house, we kinda half-prepared for TS Irene. After all, it was ONLY a tropical storm and was supposed to pass us off the south shore of St. Croix. We live on the north side of the island, so I didn't double check flash lights, put the patio furniture inside the house, or secure our south-facing shutters. In fact, my daughter and her husband were visiting and had invited one of her friends to come over with her kids to take a swim in our pool. Around 1:30, the winds picked up. Within 15 minutes, they REALLY began blowing and the line of the horizon began to blend into the sea! 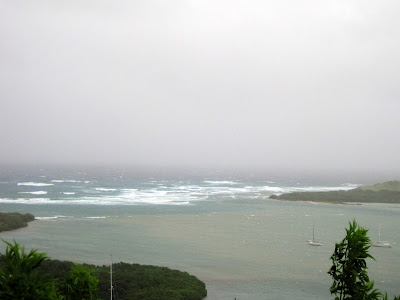 It turned out that Irene had her own thoughts about her visit to St. Croix. She decided to pass right over us, going from the south shore to the north shore. WAPA, of course, went out while it was still daylight so we faced the storm without electricity! What really surprised us was that our cell phones had no service either! (I read afterwards that out of 11ATT towers, 10 were damaged by the storm!) The eye of the storm was huge! After the eye passed, the winds and rains came from.. you guessed it.. the South! 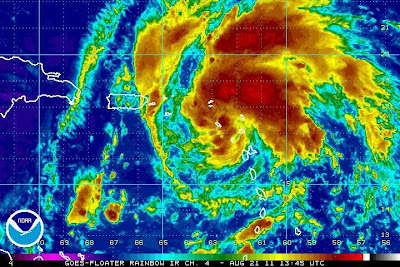 It poured until about 3AM... We awoke to lots of leaves and small branches littering our patio and driveway. There was, of course, water on the floor in our rooms facing south (woulda, coulda, shoulda!). We, along with most of the island, still had no power! Our land line phone had stayed working through the storm so I was able to call WAPA and let them know of our situation. We were not alone: almost all the feeders on the island were without power! We were among the lucky ones whose power was restored by that evening. However there are some residents out West who are still without power. Cell phone service, the same. Some of us got it back the day after the storm, others are still without. 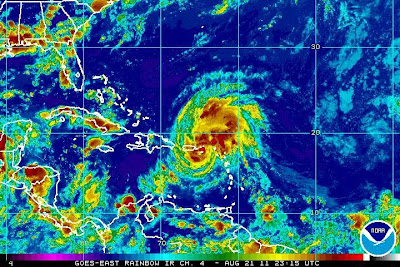 TS Irene became Category I Hurricane Irene during the wee hours of the morning, before it reached Puerto Rico. 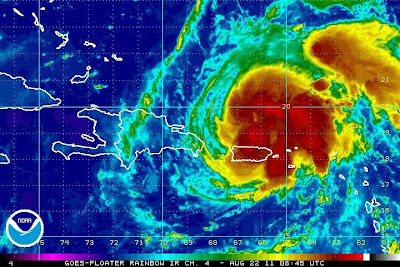 We were lucky this wasn't yet a hurricane when it clobbered us. It did serve as a good warning so we'll be better prepared if a next one decides to visit us. Hope WAPA and ATT got the message, too!
Ginger
Posted by andersontg at 6:12 AM