When I woke at 3AM to the roar of thunder and the fireworks of lightening, along with a steady, heavy rain, I figured there was a good possibility that we might not be able to paint later this morning. By 8AM I was wavering: should I go or should I stay home? Finally, I decided to go but as I was changing clothes, the lense in my eyeglasses fell out. :^( I tried to fix it myself with my trusty eyeglass repair kit, but I just couldn't manipulate it all. So, instead of going to Tamarind Reef, I drove to 20/20 Vision Center to get my glasses repaired.
Afterwards I headed east and arrived at Tamarind minutes after everyone left... in fact, Elwin saw me on the road and turned around to fill me in.
Only Elizabeth, Sandy and Elwin had shown up, and it had continued to rain (as you can see from the pictures I took through the windshield of my car), so they decided to head home. Actually, it's probably for the best because a pipe had burst and none of the toilets were working at Tamarind. 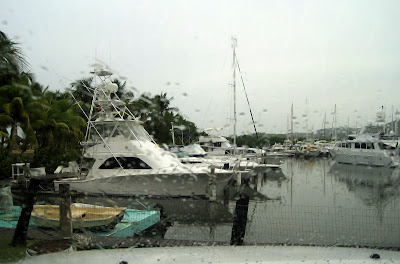 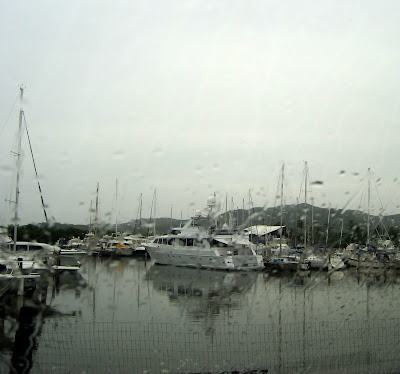 Of course, since I got back home the weather's been nice and clear! You just never know!
Ginger
Posted by andersontg at 1:33 PM